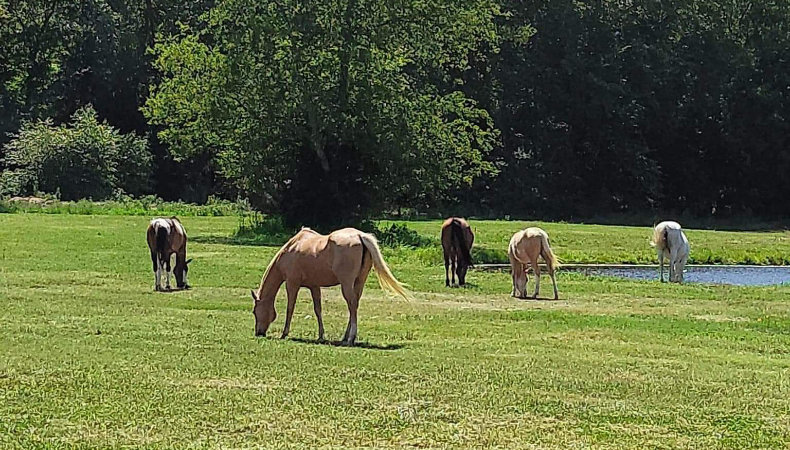 Earlier I related the story of emptying the poop trailer by hand-prefer not to relive that adventure. So I keep the battery charged and keep the hydraulic fluid reservoir full. All is well, until I try to use the poop dump trailer to move new sand into the indoor arena. First trip in the arena I notice a trail of fluid, examined the trailer and saw the hydraulic cylinder leaking. Quickly decided I could not drop fluid all over the indoor arena. Yes, yes I know I knew something was wrong when I needed to refill the reservoir. But, we were still in the 'get things done' mode and I had no intention of tackling the hydraulic cylinder without help. Turns out 'help' was away at work and not available for 5-6 more weeks.

Best chance of finishing the job was when time was available so I moved the poop pile to give me some time. Then I moved stuff around under the open equipment area so I would have some shade and backed the trailer under the equipment area roof. In advance I raked the area where the trailer was going. I found some big feed bags and made a ground cover. Apparently the prior owner collected these huge feed bags. When I cut it open I had a 10'x8' ground cover. Everything should be fine right! Nope.

I moved the dump bed up then sat it down on the built in dump box holder. It clearly had not been used in a LONG time. I oiled and greased that support and finally had to manhandle it into position. Not feeling good about that single support, I placed 4x4 lumber between the frame and dump box - just in case my good luck continued (read sarcasm). I should have air hosed the stuff that had fallen through the poop trailer. It just waited for the chance to drop into my face each time I grabbed the frame to reposition myself under the trailer.

The main bolt holding the cylinder in was 1 1/4, but it wouldn't budge with my tools and a cheater. To the parts store for a 1 1/4 impact socket. Put my Bosch impact wrench on it and it broke loose and came right out. After repositioning myself to loosen the other bolts I discovered there was one where there should have been two and it didn't even have a nut on it. So it slid right out. Those hydraulic cylinders are HEAVY. To prevent, or at least lessen the chance of it falling I rigged a couple of ropes with one set to be slowly released to get the cylinder out. I'm getting smarter and was wearing protective eyewear by this time. Using my lovely wife as an assistant and someone to be handy if a 911 call was needed, I wiggled that cylinder off and took it to be repaired. Good repair shop, they called me next day that it was ready. Reverse the procedure except now we're pulling the cylinder up into position rather than lowering it, which is a more difficult task. Finally, done with bolts and nuts in both places.

Oops, not quite done. I noticed the prior owner had tied, yep tied with rope, plywood to reinforce the rusting the dump floor. Tapping the sides I knew it wouldn't last long as it was. Fortunately I had several sheets of 9' x 4' galvanized sheet metal I brought to the ranch before. I figured if I could bend them into a big u shape I could slide them into the trailer and reinforce the bottom and the sides up nearly two feet. That would cover the bottom part of the rusting out poop trailer and the worst part of the sides.

How do you bend thick sheet metal? Of course a metal press would have been nice, but I didn't have one in my hip pocket. Back to the old way. Scribe a straight line across the sheet then use a dull pointed punch and punch every 1/4 “ along that line (preferably perpendicular to the sheet). Put a strong board along that line and ask wife to stand on it. Pull the short side of the sheet up and beat the living daylights out of it until the bend is complete. Then do it again on the other side. Then do it again for two more sheets. Eventually I was able to get three sheets slipped into place, pushed against the floor and screwed into the good metal higher up the side of the trailer. Yes, it is advertised as a twelve foot dump trailer but 3 sheets allowed an inch overlap and covered the floor and sides. For those into details, I slipped each sheet under the one in front of it so there was no place for that wonderful poop to hide between sheets. First poop run it worked great! No more taking a shovel along to scrape the corners of the trailer.

Our First Heavy Rain at the Ranch

Moving The Horses into the Arena